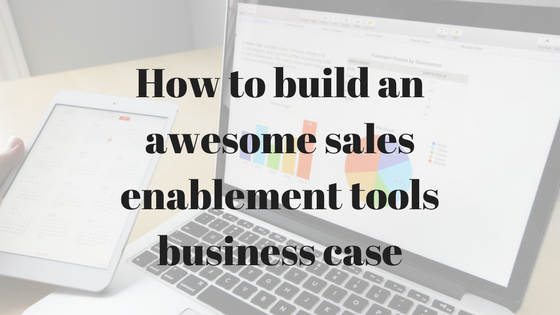 Any business case requires you to justify the expenditure on something, in this case a sales enablement tools business case. There are generally two ways to show this justification, a reduction in cost or an increase in revenue. For this example, I focused on an increase in revenue but you very well could justify it with a reduction in cost. Most notably, less time sales reps spent looking for content and doing administrative overhead.

Sales enablement tools offer a variety of benefits for a B2B selling organization that can help increase revenue.

How to Justify the Value

I was put into a lucky position, our executives agreed to invest in a sales enablement platform pilot (1,000 users) without much math behind it. Our competitors were kicking the tires with iPad based selling and we needed to keep up. So they authorized a pilot of 1,000 users, with a promise for us to justify it for a further expansion. This may sound somewhat large for a pilot, but this is a large global multinational with 10,000s of sales reps. After the pilot (a year), our executives asked for justification. I was new to this, but I did some analysis on reps – looking at their pipeline and mapping it to tool usage. I categorized them into four groups:

I then looked at two metrics: number of opportunities per rep and pipeline dollars per rep. The program was less than a year old when I started this, and since our sales cycle was close to a year, I felt it best not to look at revenue metrics.

Interestingly, we actually saw some regional variation. We rolled the program out to Europe and North America, and Europe saw more compelling numbers than North America. When I discussed this with my contacts in EMEA, they mentioned that tablet based selling was HOT HOT HOT in continental Europe and that would account for the difference.

This justification was enough to expand our usage from 1,000 pilot users (it actually crept up to 1,200 based on user demand) to 4,500 users and an enterprise global deployment. Every field sales rep, across the globe, for four product lines was provided an ipad and a license to use the tool. It was also enough justification to get sales enablement tool training included in all of our global kickoffs. Considering how packed that agenda was, I felt like it was a huge win. It was fun to travel around the world and teach sales reps how to use an ipad and effectively change the way they present. You can read some tips about what I learned here.

I did realize that my justification might have been a bit too complex though, as it was difficult to explain the differences in the groups to senior executives, and in the end my lines were arbitrary on tool usage. I knew I would need to refine this for the next go around.

Like many martech projects, there is continual justification required. So when the sales enablement service came up for renewal, we were asked to again provide justification. Having done this once, it was a tad easier to complete the same justification.

I looked at more metrics this time (based on executive feedback) along with simplifying the groups of users. This time, we drew the line at average users and then compared below average tool users with above average tool users. I felt this distinction would enable easier digestion from our management, plus after the expansion most reps were using the tool so non tool users didn’t exactly work.

The Results Are in Above Average Users Had

We also included our sales reps satisfaction and quotes on usage in our presentation, to give the end user representation. I will write a blog post on what we heard from users, but it’s important to gauge their views on sales programs, I wrote about that here. Overall I felt this justification was pretty compelling. Obviously our execs agreed as we did get a renewal for a year. The year will be coming to an end, so I expect another sales enablement tools business case to be requested yet again.

Oh, one other thing we discovered in this justification research which was not included was that the reps that closed the most deals used sales enablement tools the most. There was a direct linear relationship– more content usage resulted in more deals closed.

Our executive management team in every analysis quickly pointed one thing out. How do you know the tool resulted in improved usage? Might it be that better reps use the tools available. And the answer to that is that we just don’t know. However, the differences were so compelling that it’s probably worth taking the risk and encouraging tool usage.

This was a relatively arduous process. It took me hundreds of hours to complete this sales enablement tools business case. In addition, I had to leverage specialty internal resources to complete it and I did learn a few things:

Track us on social!